How Afrofuturism Inspired Guy and Guy Inspired a New Curriculum

Deep puts young people at the center of our learning spaces. What do we mean by that? In Deep workshops, youth make choices about their own creative work, of course. But more than that, their feedback—or pushback—can change the course of a program year and sometimes revise an entire curriculum.

Case in point: the young people in Deep’s Block by Block (BxB) program continually challenge our staff—and the larger Savannah community—to expand our perspectives on youth development, arts education, and the importance of youth participation in debates on critical community issues.

The Block by Block curriculum supports youth and adults in place-based learning, creativity, and civic engagement on challenges facing their communities. Our teaching artists encourage youth in their writings to be “real” and not to sugarcoat their observations about their lived experiences and the world. However, in 2017, one young author pushed back and made us rethink what we mean by “real” and just how committed we are to supporting our young people’s perspectives.

Meeting Guy Where He Is

A young author named Guy wasn’t feeling the writing prompts. Not that he didn’t want to write about reality and real-world events; he just wanted to do it through a different lens, a world of his own creation. Making up his own writing prompts, he set his narratives in a wholly different, speculative world. In his “Destruction of Nexus,” Guy writes:

The year is 3090. Our leader Kyro has been ruler since 3070. Now, killed by the mad murderer Renegade, who will help us? The legend rank heroes were defeated: Brynn the axe-wielder of Frost, Tec-16 the weapon creator; lastly, Cronos the strongest being alive. All defeated by Renegade. There is no escape from him now. He is unstoppable and far too powerful.

As Guy built the layers and characters of his world, our teaching artists met him where he was. They encouraged his speculative fiction while challenging him to make connections between his science-fiction universe and his life. Guy opened up as he considered questions like “How can you compare characters like Renegade and the world of Nexus to our world? What issues do you encounter in your waking life that your characters also face?” 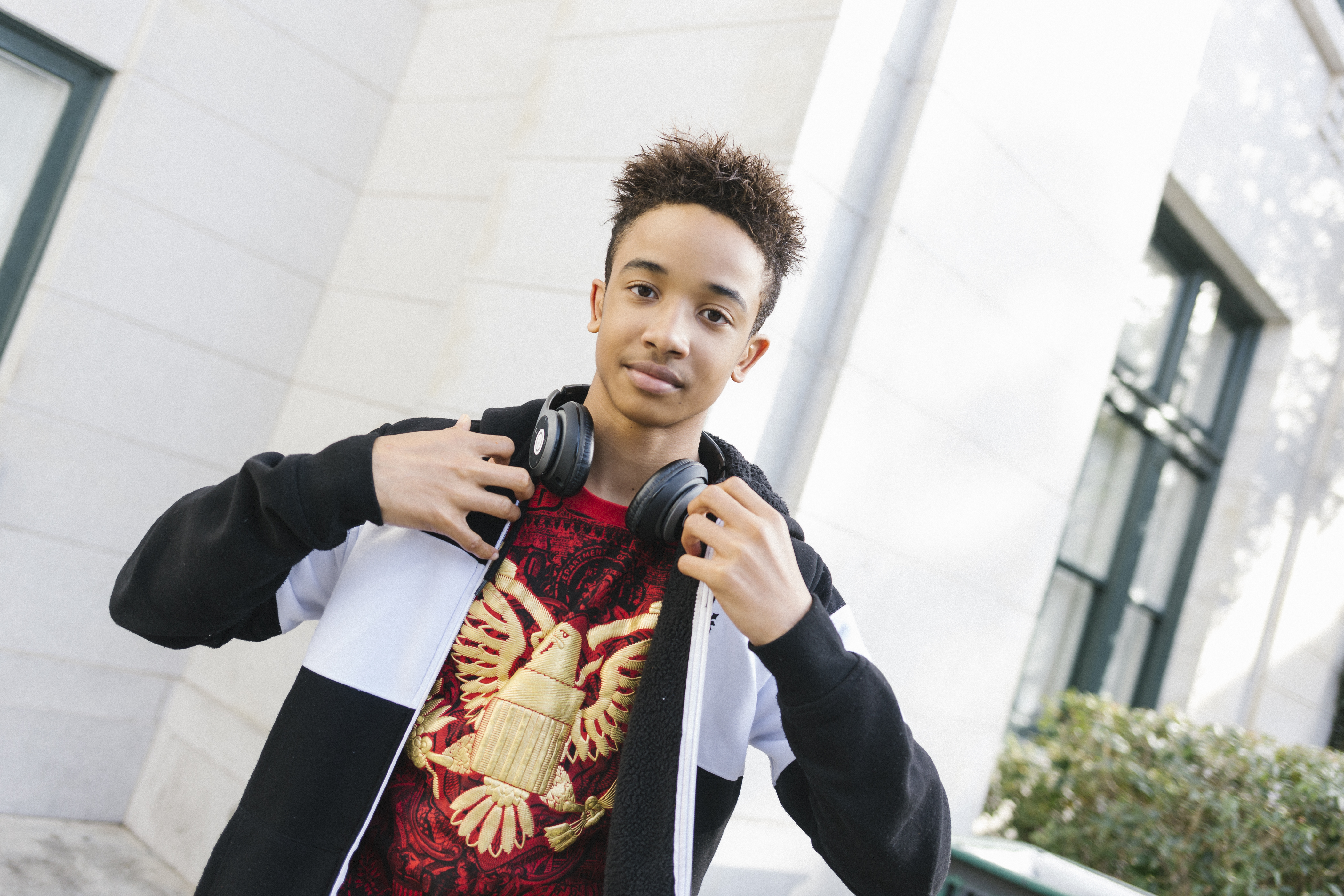 Guy, one of the young artists in Block by Block. Photo: Angie Stong.

Inspired, Guy gave voice to new insights, drawing links between the other-worldly struggles of his characters and issues like police brutality, racial oppression, and climate change. By embarking on an adventure to the world of Nexus, Guy processed and developed solutions to real-world challenges through a genre that has long been an effective tool for critiquing the troubles of the present.

At the time, Guy didn’t know what to call the genre of his writings, beyond “science fiction.” But the more he wrote, the clearer it became that he was engaging in his own brand of Afrofuturism, which, among other things, integrates elements of science fiction, fantasy, and Afrocentrism to critically analyze the current challenges and imagined futures of African American communities.

When Learners Drive the Learning

So when it came time to plan the Block by Block curriculum for 2017–18, Deep learned from Guy and leaned into his inspiration. What was originally an improvisational response to Guy’s creative needs evolved into a workshop series around speculative fiction. For the past three months, the Block by Block adult and young artists have explored Afrofuturism and its intersections with Gullah Geechee culture. They’ve grown to understand, critique, and re-envision the 80-year gap that alienated generations of Gullah Geechee people who once called Savannah their home. At the same time, participants have investigated how Afrofuturism distills and dissects the injustices that they have perceived in their own lives and communities.

Youth participated in a workshop with Stephanie Toliver, a Ph.D. candidate at the University of Georgia, who studies representations of and responses to people of color in speculative fiction. Our arc of learning started when Stephanie led a training with Deep staff in fall 2017. She then returned in February 2018 to work with Block by Block artists to deepen their understanding and use of Afrofuturism as a creative tool. Is it horror? Is it historical fiction? Sci-fi? The group discussed how Afrofuturism overlaps with all of these genres. 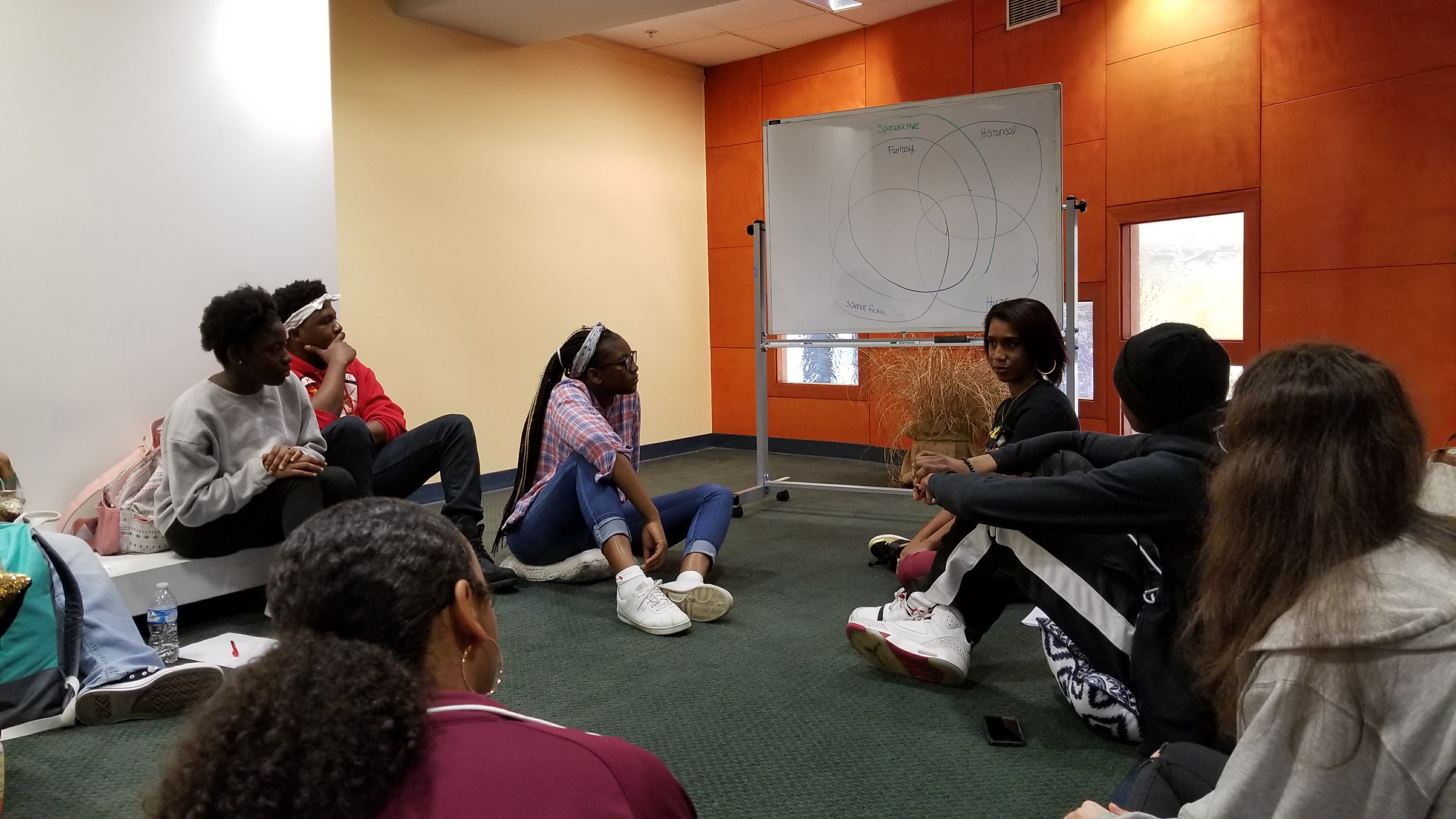 Stephanie then invited the participants to engage in what she called a “science fiction thought experiment.” Each young artist developed a unique answer to the following question: “What is one social problem in the world that you wish you could fix?” Youth shared their perspectives on diverse issues like toxic masculinity, greed and ungratefulness, heartbreak, corruption, violence, mistrust, hate toward others, abuse, and exploiting trauma to exert power (to name just a few). With these social ills in mind, the young people then reconsidered their thought experiments:

What would happen if society didn’t fix this problem in 10 years? In 50 years?

What is something new, or a novum, that you could introduce to fix the problem?

How would the world (and your characters in the world) change as a result of the novum?

When one young artist asked, “How can I fix this problem when it’s so big?,” Stephanie shared that “anything that you want to happen, can happen—but you have to make it happen with your imagination.” For the next twenty minutes, the youth devised all kinds of nova to address their identified social ills, from superheroes to medicines to new educational systems. One young artist conquered the disparities between “inner-city blight” and “the gleaming suburbs.”

As it happened, this creative module on Afrofuturism was part of a nationwide cultural convergence, thanks to the ground-breaking blockbuster Black Panther (we swear, we didn’t plan it that way). The very next day, thanks to a donation from some very generous Hollywood TV writers, the Block by Block youth had the opportunity to see the film, which is a sparkling example of how Afrofuturism can powerfully render the complicated narrative of the African-American experience. It’s also the first major superhero movie to feature a black director, black writers, and a majority black cast. 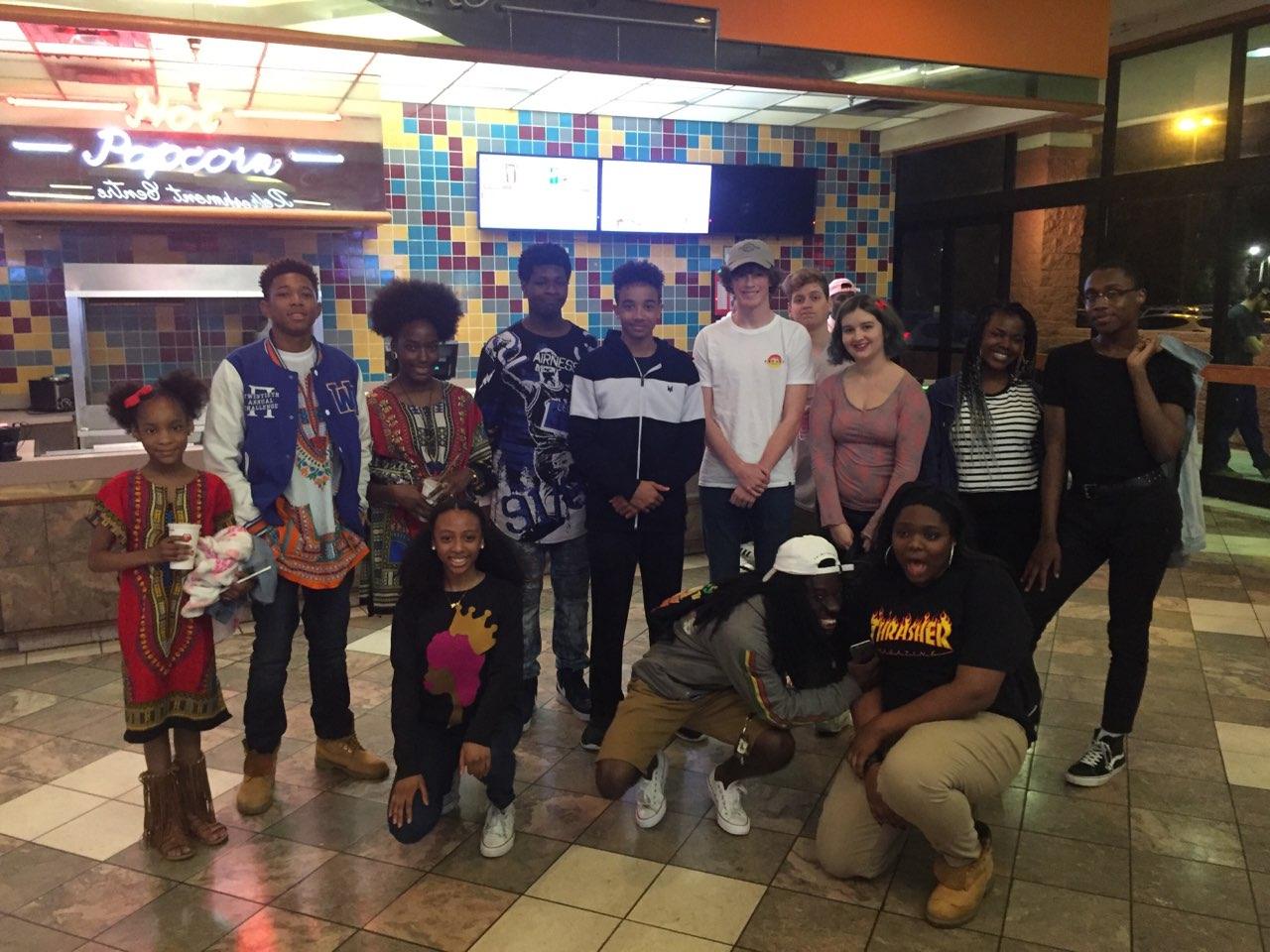 After the movie, the young artists talked animatedly about the cultural landscape of Wakanda, how they would use vibranium (a novum of its own), and how they would solve the racial inequities they’ve witnessed in Wakanda and in their lived experiences. And for their part, with the support of Deep, Guy and his peers keep projecting their realities into an Afrofuturistic future to investigate and solve the issues they are confronting right here, right now, in the city of Savannah.

Here’s a scene from “The Devil’s War,” by fellow Block by Block artist Isaiah:

Hailey was fuming and seeing crimson in her vision. Her breath was ragged and came in short bursts, but she continued on through the abandoned buildings, her cerulean-colored eyes scanning the area in front of her. She widened her eyes in shock as a human-like figure shot forward, leaving nothing but white smoke behind.

She swung between abandoned apartments chasing the robed figure in front of her. Pressing a button on the handle equipped to her arm, the gears on her 3DM equipment whirred violently as she burst forward with an incredible amount of speed, leaving a smoky trail behind her. The robed figure only had time to turn to look behind him before Hailey’s body slammed into his, the pair crashing through apartment windows and ultimately falling onto a lower building’s roof, surrounded by the glittering light reflecting off of shattered glass.

As the two figures rose, lightning flashed in the sky; illuminated by its powerful light, the man’s face shone, his two caramel-brown eyes narrowed at the younger woman in front of him. They stared at each other quietly until the younger woman turned to face him, her own glare rivaling that of the man’s.

“Zayvius…is this really what it’s come to?” the woman asked him, her voice shaky with anger and sadness. Zayvius unsheathed one of his blades and pointed it at her torso.

“It ain’t matter which path we chose; this fight was inevitable. This is where your petty interference comes to an end.” Hailey sighed sadly and took a deep breath, her resolve still strong. Unsheathing a blade, she got into her sword stance and faced Zayvius.

“I… I’m not backing down either, even if you’re my brother, I will not let you keep doing this! You’re just as twisted as the so-called white devils.” The two teenagers lunged at each other, lightning illuminating the sky once more as their blades clashed together.

“When did this all begin…” Hailey briefly closed her eyes and remembered to a time before she was fighting for her life. 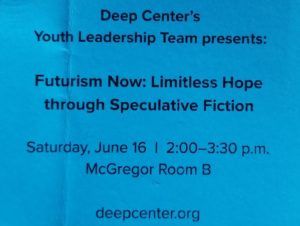 In summer 2018, funded by a grant from the Ford Foundation, Guy and eight members of Deep’s Youth Leadership Team brought this experience to the Allied Media Conference in Detroit. They designed and presented a workshop entitled “Futurism Now: Limitless Hope through Speculative Fiction,” which featured Deep’s model, developed as a response to Guy’s inspiration, of using Afrofuturism as a tool for community building, critical literacy, and civic engagement.

Investment and support for our Block by Block program is provided in part by the City of Savannah, Gulfstream Aerospace Corporation, the Forward Promise initiative of the Robert Wood Johnson Foundation, the National Endowment for the Arts, Surdna Foundation, and the United Way of the Coastal Empire. 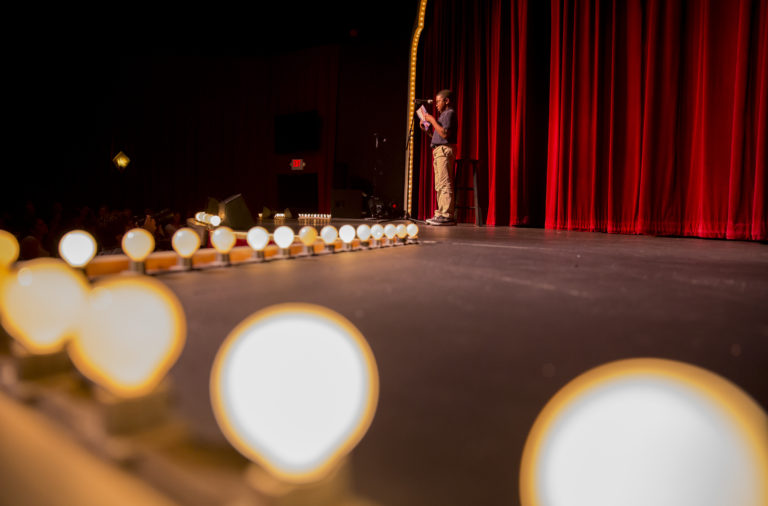 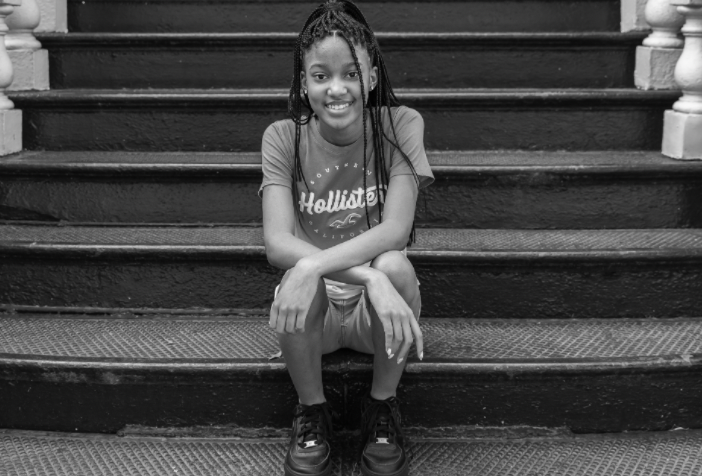